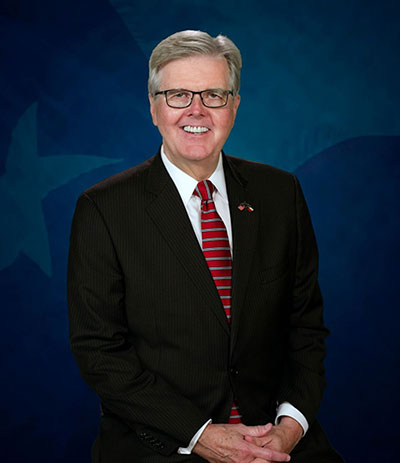 Dan Patrick was first elected Lt. Governor of Texas in 2014 and re-elected in 2018.  A preeminent voice for principled conservative policies both in Texas and across the nation, Lt. Gov. Patrick is leading the fight for life and liberty in Texas including securing the border, reducing property and business taxes, standing up for the Second Amendment, and addressing Texas’ infrastructure challenges to assure that our state continues to flourish economically.

Lt. Governor Patrick presided over what has been called the most conservative and productive sessions of the State Senate in Texas history. Focusing on strategies to keep Texas families and communities safe and the state economy strong, under his leadership, the Senate passed legislation to dramatically increase support for border security and reduced the franchise tax by 25% on a pathway to eliminating it altogether.

Lt. Governor Patrick has championed property tax relief over several legislative sessions and continued the education reforms he began as Chair of the Senate Education Committee, tackling the problems of failing schools and giving parents more choices for their children.  He initiated a faith-based collaboration across the state that has resulted in hundreds more families volunteering to provide foster care for children in the state system.  He is an outspoken supporter of law enforcement and, among other things, initiated a program that ensures that every police officer on patrol in Texas has a bulletproof vest that is capable of withstanding a high-caliber rifle shot.  He is an outspoken supporter of life and religious liberty.

Before he was elected Lt. Governor, he was twice elected to the Texas Senate representing part of Houston and Northwest Harris County. He is a successful small-business man and radio host, a former television anchor, sportscaster, musician, Christian author, and movie producer.

Lt. Governor Patrick is also involved in his community. He has raised over $16 million for children with disabilities through his radio show. He wrote a Christian bestseller, “The Second Most Important Book You Will Ever Read,” and produced the awarding-winning Christian film, “The Heart of Texas.”  He also helped establish the first prison seminary in Texas prison to train long-serving inmates for the ministry.

Lt. Governor Patrick has been married to his wife Jan, a former schoolteacher, for 46 years. They are the proud parents of two children and the grandparents to seven grandchildren.